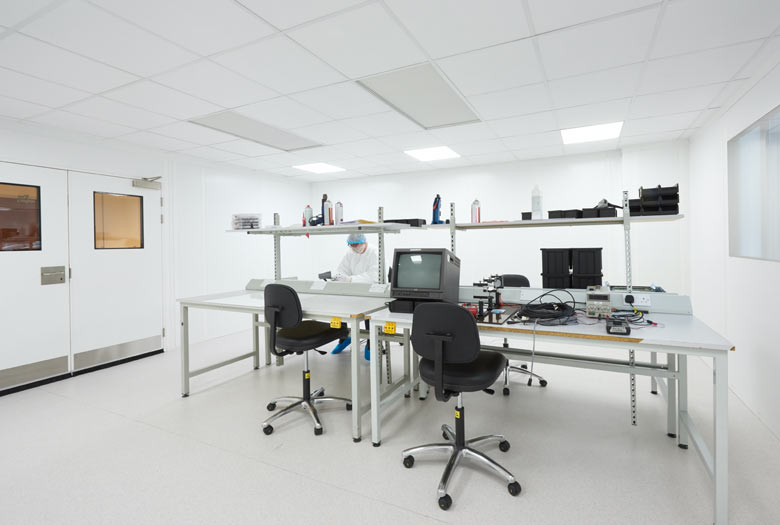 Our Cleanroom measures 6Mx6M and operates under the BS EN ISO 14644-1:2015 cleanroom standard, it has a classification of ISO 7.

TO WORK WITH US CALL:

Discover how our experienced designers and engineers can help your business.

What is a cleanroom?

The most accurate way of answering this question is by quoting the ISO standard BS EN ISO 14644-1:2015 definition of a cleanroom. This is the standard which all cleanrooms must conform to and the following explanation gives the defining parameters of a cleanroom.

A cleanroom is a “room within which the number concentration of airborne particles is controlled and classified, and which is designed, constructed and operated in a manner to control the introduction, generation and retention of particles inside the room”.

Our Cleanroom measures 6Mx6M and operates under the BS EN ISO 14644-1:2015 cleanroom standard, it has a classification of ISO 7 which means that the air drawn into the room using HEPA (High Efficiency Particulate Air) filtration, provides a controlled environment for airborne particles and changes between 60 and 90 times per hour.

The cleanroom provides a production environment with controlled airborne contamination which is essential for a wide variety of electronic, optics and other critical manufacturing assemblies to ensure that sensitive products are not harmed during the manufacturing process.

This website uses cookies to improve your experience while you navigate through the website. Out of these, the cookies that are categorized as necessary are stored on your browser as they are essential for the working of basic functionalities of the website. We also use third-party cookies that help us analyze and understand how you use this website. These cookies will be stored in your browser only with your consent. You also have the option to opt-out of these cookies. But opting out of some of these cookies may affect your browsing experience.
Necessary Always Enabled
Necessary cookies are absolutely essential for the website to function properly. This category only includes cookies that ensures basic functionalities and security features of the website. These cookies do not store any personal information.
Functional
Functional cookies help to perform certain functionalities like sharing the content of the website on social media platforms, collect feedbacks, and other third-party features.
Performance
Performance cookies are used to understand and analyze the key performance indexes of the website which helps in delivering a better user experience for the visitors.
Analytics
Analytical cookies are used to understand how visitors interact with the website. These cookies help provide information on metrics the number of visitors, bounce rate, traffic source, etc.
Advertisement
Advertisement cookies are used to provide visitors with relevant ads and marketing campaigns. These cookies track visitors across websites and collect information to provide customized ads.
Others
Other uncategorized cookies are those that are being analyzed and have not been classified into a category as yet.
SAVE & ACCEPT
Powered by

Christine joined Nemco in 2008 to provide material costings for customers within the Purchasing department, and took on the role of Purchasing Manager in August 2013. Experienced in Electronics Distribution, CEM and Defence Manufacturing, positions have included Sales Manager, Customer Service Manager, additional to senior roles in Continuous Improvement, Logistics and Materials Management.

In her spare time, she is an avid reader of classic literature and genre fiction, and swims several times a week.

Derek joined Nemco in 1999 as a Design Engineer. Starting his career with Marconi Space & Defence Systems, he has worked for various System House and Design companies and has over 30 years’ experience in electronic hardware & software design.

Derek is responsible for the administration and development of the company’s IT and ERP systems. He also provides technical support for manufacturing and project management of electronic design.

Archie joined Nemco in 2016 as Financial Accountant to strengthen the team and took on the role of Company Accountant in May 2019.Archie has 16 years’ experience in Finance gained in both the Retail and Manufacturing Industry. Archie is a member of Chartered Institute of Management Account and is responsible for the overall accounts activity, working with suppliers, customers and internal contacts. He spends his free time with his family, enjoys running, swimming and a keen follower of sports.

Karen joined Nemco in 2003 being specifically tasked to set up the HR department. Karen describes herself as a qualified HR generalist, her previous experience having been gained in both the Retail and Manufacturing industries often in a unionised environment.

The HR department in Nemco now employs two staff in addition to Karen and is responsible for the Personnel, Training and Health and Safety functions. Karen has been a member of the Chartered Institute of Personnel and Development throughout her career.

Steve joined Nemco in 2005 as a Production Engineer. He has over 30 years’ experience working in the Electronics Manufacturing and Quality environment, beginning his career with a formal Apprenticeship at British Aerospace.

Having spent the 11 or so years prior to Nemco working within Automotive Quality, Steve is more than qualified for his current position of Production Engineering and Quality Manager.

Kevin joined Nemco in May 2011 having previously worked in the Electronic Components field for 25+ years. He has a wealth of experience within the industry, gained from the various positions he’s held ranging from Account Manager to General Manager.

Kevin is now totally responsible for all aspects of Sales and Marketing within Nemco and consequently spends a significant amount of his time visiting customers to preserve and enhance the business partnership.

He is also a keen sportsman which these days revolve around Golf and Cycling.

Kim joined Nemco in 2015 from a predominantly aerospace background. She has 20 years’ experience in manufacturing gained from various Engineering and Management roles – Previous positions held include Process Specialist, Manufacturing Manager and Plant Manager. Kim is responsible for Manufacturing at Nemco, driving improvements and developing the production process and systems to suit our growing requirements.

Outside work she likes to make the most of her time with her family and occasionally some home improvement ‘upcycling’ projects.

David joined Nemco in 2015 strengthening the Senior Management team as Sales and Marketing Director. David brings with him an international wealth of sales, customer service and marketing expertise. Prior to joining Nemco, David has worked predominantly in the sales and electronic engineering sectors, employed long-term in prestigious Global companies such as Technicolor and Thomson SA. Degree qualified in business management and electrical engineering, positions have included managerial statuses such as Head of Supply Chain, Managing Director and Customer Services Director. David will use his expertise to increase our service offerings and also to increase our customer base taking us to the next level of business growth.

Bob has been with Nemco since its inception. A qualified Electronics Engineer and stamina that knows no bounds. Bob spends much of his time overseeing the key activities within Nemco and is often the first port of call for customers seeking technical assistance. If you are a customer of Nemco then it is likely that Bob’s number is on your speed dial.

Dave is the owner and founder of Nemco. During his early career Dave was actively involved in Electronics Design and Development encompassing system design and project management. Prior to setting up Nemco Dave was Managing Director of a Systems house engaged in contract product design, plus the supply of turnkey ATE and production monitoring systems.

Dave is actively involved with both the Executive and Technical Management and customer facing contract evaluation and costing aspects of the business. On the outside Dave is a Classic Car enthusiast, driving, racing and maintaining his own vehicles.